Martha had Paula Abdul on (in all her non-coherent glory) and made Chocolate Thumbprint Cookies during cookie week (why isn’t every week cookie week in my life?) This recipe is also in December Living. I have to say, I passed right by the recipe in the magazine. It didn’t strike me as anything great. But then I saw it on-air and I knew it was something I had to make.

As complicated as Martha can sometimes make things, this cookie was actually pretty easy. First you make the cookie dough which is nothing difficult at all. It’s a basic dough with lots of cocoa powder (I used Hershey’s special dark). The dough did not firm up into a ball for me – it was a bowl of crumbs, pretty much. When I smushed it though, it stuck, so I was able to roll out the balls. You roll them in sugar then put them on the baking sheet.

On the show, Martha suggested using the end of a wooden spoon to make the indentations in the cookies. As you can see, this didn’t work very well. The cookies ended up splitting down the sides. I used my thumb instead and it was much more successful.

Baking them should have been simple, except I chose to attempt this on a weekday afternoon. I got them halfway done, and a child needed a ride, so out they came. I got home and put them in again and another child needed a ride. Out came the cookies again. It went on and on this way. It is truly a miracle they turned out at all.

Once these are baked, you make the chocolate and vanilla ganache to fill them. This part of the recipe was unnecessarily complicated. Martha wants you to cook honey and cream and scrape a vanilla bean and cook it with the scrapings and the whole pod. I did not have a whole vanilla bean and my grocery store did not sell any. I just dumped in about a teaspoon of vanilla extract instead. 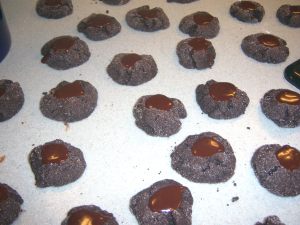 Martha then wants you to cool this and strain it and then pour it over the bittersweet chocolate in a food processor. My food processor which  has served me well for 20 years) just died – actually the bowl broke. So until the replacement bowl gets here, I’m without one. Instead I just dumped the chocolate into the pot and warmed it up until the chocolate melted. No straining or mess. Very easy. Once it cooled, I spooned it into the cookies and let them rest. I needed to refrigerate them to get the ganache to really set up so I could pack them away.

The verdict? This is absolutely delicious. A good thing.  The cookie tastes very much like a very dense brownie. The ganache is tasty too. One point of contention – the recipe says it makes 90. 90! No way. Given, the recipe says to make each cookie 2 teaspoons, but on the air Martha was using a small little ice cream scooper/melon baller thing, so I used that too. This recipe made maybe 25 cookies for me. They weren’t huge either  -they were just about the right size. If you want more, you’ll need to double the recipe.

Happy birthday to me today!

This entry was posted on Saturday, December 13th, 2008 at 3:19 pm and is filed under Food, Holidays. You can follow any responses to this entry through the RSS 2.0 feed. You can leave a response, or trackback from your own site.