Local strawberries are in and I’m looking for lots of ways to use them. I decided to make Martha’s Vacherin with Whipped Cream and Mixed Berries . (July Martha Stewart Living) I had never heard of vacherin, but the recipe is basically for meringue with whipped cream and berries. It sounded light and tasty and the photo in the magazine was pretty and appealing.

The first step is to whip the egg whites.  Let me be honest here – I have no idea if I whipped them long enough. Martha says to whip until they are very stiff and glossy. Mine were glossy but I have no idea how stiff they should be. I guessed. 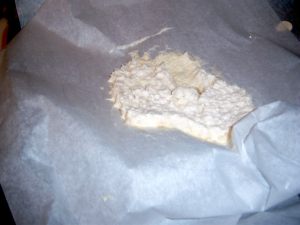 You draw a circle on parchment paper and heap the egg whites inside it, on two separate pans. Then you bake it at 200 for 2 hours and then turn the oven off and leave them inside for an hour and a half. I did all this precisely, however when I went to assemble this, neither of the meringues were cooked all the way through and stuck to the parchment paper. I was totally crushed. I’m really getting tired of following Martha’s instructions to the letter only to have it not work! The good thing about this recipe is that the mess was easily covered by whipped cream.

very pretty. It actually cut pretty well, but didn’t look so great on the individual plates. It looked mushy.

As for taste, the part of the meringue that was cooked was delicious- crunchy and sweet and light. I loved it with the berries. I thought there was a bit much whipped cream for my taste.

The biggest problem with this dessert is that it is a use or lose it proposition.

You can’t save it since the meringue gets mushy. So you really need to be prepared to serve and eat the entire thing or waste it.

If the meringue had been cooked, this would have been a winner.

This entry was posted on Monday, June 29th, 2009 at 9:05 am and is filed under Food. You can follow any responses to this entry through the RSS 2.0 feed. You can leave a response, or trackback from your own site.