I love roast chicken. The way it smells when it cooks, the way the skin gets crispy, the white meat, and then picking at the remains at the end of dinner. The thing about roast chicken is that you put it on the table and you feel as though you’ve made a real MEAL. Martha has a recipe for what she called Perfect Roast Chicken, in Martha Stewart’s Cooking School cookbook.

You fill the cavity with some lemon slices, garlic and rosemary. You’re supposed to truss the chicken, but I had no twine!! Egad. Martha never runs out of twine.

The interesting thing about this recipe is the oven temp. Martha says to roast 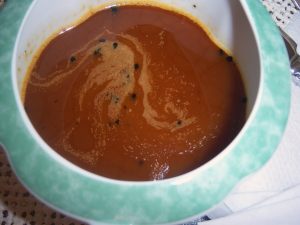 a 4 lb chicken at 450 degrees for 50-55 minutes. Usually I roast chickens at 350. It seemed really hot, but I have to say that it did work. The chicken got a bit dark on the top, however. It was very crisp and it did cook all the way through. The chicken was really, really moist, so I’m going to use this technique again. I’ve made chickens with lemon and garlic in them before, and as always, it doesn’t seem to flavor the meat at all as far as I can tell. That part is frustrating.

The family approved of this, although we had the usual squabbling about who was getting what type of meat. My son used to be a drumstick guy, but now he and his sister both  insist on white meat, as do I . Mr. MarthaAndMe is the only one who will eat the rest, so I either need to start making two chickens or make an additional chicken breast to go along with it. 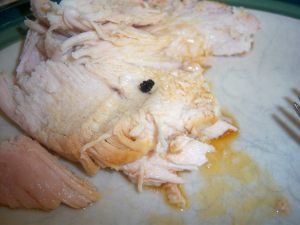 Next Martha says to make a pan sauce. You cook the pan drippings with white wine until reduced then add some butter. It was a quick sauce to whip up, but it was so thin and very greasy. I would much rather have gravy. No one was wild about this sauce.

Was this a perfect roast chicken? I wouldn’t call it perfect, but I would say it was darn good.

This entry was posted on Wednesday, July 15th, 2009 at 9:24 am and is filed under Food. You can follow any responses to this entry through the RSS 2.0 feed. You can leave a response, or trackback from your own site.