Beef Rolls on a Hard Night 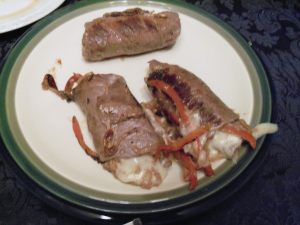 Although I had hoped that 2010 would be a drama-less year for us, we’ve already started out with a few medical issues hanging over our head. Hopefully everything will turn out to be minor, but I would appreciate your good thoughts until we get some answers from upcoming tests. I had a hard day after learning about the latest possible medical complication and after allowing myself time to stew and worry, I pulled myself up by my bootstraps and decided keeping busy was the best plan. Fortunately, there was lots to keep me busy. First we put away all the Christmas decorations (and considering it usually takes an entire weekend to get them up, getting them down in a day was an accomplishment). Once that ginormous task was done, I piddled around the house doing laundry and other household tasks. Mr. MarthaAndMe turned on the tv and my favorite movie of all time (Same Time Next Year with Ellen Burstyn and Alan Alda) was on.  We watched the last half of it and I had a good cry, which I always do with that movie,but which was especially cathartic that day.

Then it was time to make some dinner. I felt unmotivated, but knew I had some sliced top round in the freezer, which I bought to make Martha’s Beef Rolls with Spring Salad. So I got them out and got to work. I was leery of this recipe because I was afraid the beef was going to be tough. I also had to get a little creative. Mr. MarthaAndMe and I had the beef rolls as described in the recipe (sans salad – I made a pasta with broccoli in it instead), but Dude Martha doesn’t like cheese, so I left that out of his. Teen Martha doesn’t like peppers, so I made hers with just cheese.

These took forever to cook. Finally I ended up covering it to get it cook quicker, but it was still almost too pink inside for my tastes.

Yes, I just dumped these on a plate and did not make it look pretty – some days just getting food on the table is an accomplishment.

As for taste, it was ok. I thought the beef was a little tough, especially at the edges. I liked the peppers and onion and cheese. It was kind of like a cheesesteak in a way. It’s hard to make these without the cheese oozing out all over the place, unfortunately. It was fine, but I wasn’t wild about it. I probably wouldn’t make this again.

This entry was posted on Tuesday, January 12th, 2010 at 9:08 am and is filed under Food. You can follow any responses to this entry through the RSS 2.0 feed. You can leave a response, or trackback from your own site.

6 Responses to Beef Rolls on a Hard Night