I love hollandaise. I love it on asparagus, salmon, and broccoli. Sometimes I make hollandaise and then I add some cream and orange juice instead of lemon and use it on other fish. Hollandaise takes patience. I usually make mine in a pan and I start by melting butter and adding egg yolks and lemon juice, cooking over super low heat and constantly stirring, and then adding more butter at the end. I like it to be very thick.

I was intrigued when I saw Martha make easy hollandaise in the blender on her show the other day. She put in the egg yolks, lemon juice and warm water with salt and made it frothy in the blender. Then she poured in melted butter, which she suggested you cool first, slightly. She whizzed that up and supposedly it was ready.

I was leery of this – if you do it in the blender and cool the butter, how will the egg cook? I was willing to try it though.

The first problem was that once I had the egg, lemon juice and water in the blender, it did not come up to the bottom of the blades in mixer! I couldn’t froth it! Mr. MarthaAndMe wisely whipped out the little latte frother Dude Martha got in his Christmas stocking and stuck it in there and got it to froth. Whew. Then I added the butter in a slow stream (and I did use HOT butter and did not cool it as Martha suggested on TV).  The recipe says to blend until it thickens. Mine did not thicken and it was not hot or even very warm to the touch. Finally I gave up, dumped it in a sauce pan and cooked it on the stove quickly.  This got it to thicken up and I was certain the eggs were properly cooked.

I guess I wouldn’t recommend this method. It is faster than the traditional method, but it seemed to lack something in its consistency and did not have the same velvety texture. I also would not serve this straight from the blender without heating it up, so you would end up using a blender and a pan. Too much fuss for me.

I made this decoration for the front door myself. I bought the basket, filled it with moss and then just stuck in some artificial little daffodils and some ivy to green it up.  I’m actually pretty proud of it! 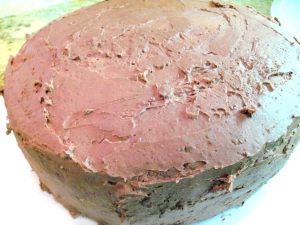 Those of you who know my baking style know I ALWAYS make cakes in just one bowl. I never sift. So this cake fit into my philosophy. It’s from April Living. The cake is easy to make and you just dump it in and mix it.

Easy. Mix, bake in two cake pans at 350. Mine took 25 min. The frosting is not as easy and involves melting chocolate:

I had just enough frosting with this, so don’t go overboard in filling the layer.

It made a lovely looking cake and the frosting is really dense and provides nice coverage. I liked the cake (but it’s still not as good as my Gram’s mayo cake). The frosting was a bit sour almost, so I think I might not use all bittersweet chocolate. I did like the texture of it though. 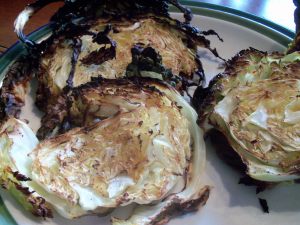 I have to thank Martha for opening my eyes to cabbage. She first got me on the cabbage train last year when I made her stuffed cabbage and fell in love with it. Cabbage is not stinky, strong-flavored or nasty. It is sweet and delicate. So I was in when I saw roast cabbage in Everyday Food. This is incredibly easy. Just slice some rounds of cabbage (1/2 inch thick) and put on a baking sheet. Brush with oil and salt and pepper them. Martha says to bake at 400 for 40-45 minutes. I pulled mine out at about 30 minutes because it was burning. Next time I might roast at a lower temp for longer. I used savoy cabbage which I prefer to regular. The cabbage turned out tender and sweet and even the kids tasted it and did not reject it. 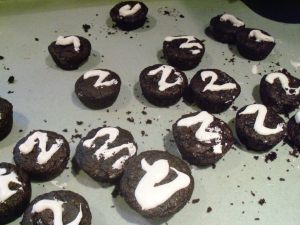 It’s time again for the MSC Cupcake Club. This month’s recipe is Jumbo Cream Filled Chocolate Cupcakes from Martha’s cupcake book. My motto for this project is “Oh me of little faith”. These cupcakes are supposed to mimic the Hostess cupcakes I grew up adoring.

I whipped up the batter and thought it tasted pretty good. I made these as regular size cupcakes, not jumbo. When they came out of the oven, one fell apart and I sampled it. Here is where the “oh me of little faith” motto comes in. I thought it tasted not so great – dry and crumbly and not good. I was worried this was going to be a disaster.

Then I made the filling. I am NOT a fan of marshmallows, so once again I thought this was going to be a thumbs down component since it is just Fluff and butter. I didn’t really care for how the cream filling tasted.

Then I began the task of filling the cupcakes. I admit I used a ziploc bag w/ the corner cut off and did not attempt a pastry bag. I had some real trouble hollowing these out and filling, which may have been b/c I did not make jumbo size. They fell apart, the pieces I cut out fell apart, etc. And of course my ziploc was a mess. I made zigzags on the top but had to make an extra half batch of cream filling because I ran out. I had crumbs and cream all over the counter and my hands – I looked like the creature from the Black Lagoon.

After all that fuss, I was sure this was going to be a reject recipe. Surprise! I loved this when it was all together and once I had forgotten what an unholy mess they were to fill. It did taste just like the Hostess cupcakes (although it was missing the layer of chocolate on the top). For the life of me, I do not know how cupcakes that tasted dry and awful and cream filling that tasted yucky could come together to make something so divine. Some weird alchemy. Martha gets major points for this, and so does the MSC club because I would never have tried this one on my own.

I usually post the assignment for Martha Mondays on Tuesdays, however, the past two weeks the people assigned to choose have never answered my emails reminding them (I did post a schedule so everyone should have been aware of their scheduled date). If you don’t want to choose, I would really appreciate it if you could at least let me know instead of just radio silence. If you no longer want to participate, I will take your name off the blogroll.

Since once again the choice is left up to me, I’m choosing One Bowl Chocolate Cake from April Living for Monday 4/19. If you need the recipe, let me know.

There will be no Martha Mondays for April 26 and we’ll pick it up again for 5/3 – the person choosing for that date is Mum in Bloom. And here is the schedule from that point on. IF YOU DON”T WANT TO BE ON THE SCHEDULE, PLEASE LET ME KNOW.

5/24 City Interlude (Hannah I have tried to contact you but got no response. Please confirm you want to be on this list)

The idea of this cake from April Everyday Food got me excited. It sounded like it would be easy and healthy. It wasn’t all that easy! I assumed it would use applesauce. Nope. You have to peel, core, and cut apples and then cook them. Then you mix that with all the other ingredients and bake it.

You are supposed to dust it with powdered sugar when serving. Even with that as a topping, this was not very sweet. Therefore, no one wanted to eat it. It also didn’t taste very

apple-y. Since it only has three apples in it, the flavor was not strong. I’m not even going to bother sharing ingredients here since I don’t recommend this cake at all.

HOWEVER, I am going to share my own recipe for an apple cake that is to die for, so hold on to your hats for this one:

Combine the oil and sugar. Add eggs and vanilla and beat well. Beat in flour, soda, spices and salt.  Stir in apples and nuts.

Bake in a buttered and floured tube pan at 325 for 1 hour and 15 minutes. Let it cool in the pan then remove.

Melt all together in a saucepan then boil for 1 minute. Serve alongside the cake as a sauce.