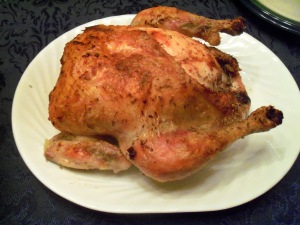 I am a sucker for crispy potatoes. I admit I didn’t really give the roast chicken recipes in Jan Living much of a second glance until Sarah Carey came on the show and made them. The potatoes in the Crispy Skinned Chicken recipe hooked me. I was also interested to try putting butter and cornstarch on the chicken skin.

I used Yukon Gold potatoes because that’s what I had and I also didn’t have fresh rosemary. It turned out really well. This is an open-kitchen-window recipe though – any time I cook chicken at a high temp like this it smokes up the house. The chicken cooked nicely and was quite crisp (so I will use this method again). The potatoes fell apart a bit when I tossed them in the pan and

I did have to put them back in the oven once the chicken was out to get them a little browner, but they were good.

I used dried rosemary, so that may be the problem, but I just kind of wanted the whole thing to have a little more flavor overall. Other than that, it was excellent!

This entry was posted on Tuesday, January 11th, 2011 at 12:36 pm and is filed under Food. You can follow any responses to this entry through the RSS 2.0 feed. You can leave a response, or trackback from your own site.