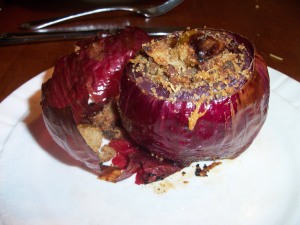 I only made one of these onions (in November Living, not online yet) because I knew I wouldn’t like it (I don’t like Italian sausage or fennel) and the kids wouldn’t eat it. I had hopes that Mr. MarthaAndMe might eat it, but he did not care for the onion. He thought the stuffing was good. I don’t quite understand the concept of eating an onion, even if it is stuffed. Maybe the rest of you liked it and we’re just weird? It wasn’t hard to make – just took some time. It was also pretty with the red color. Sassy Suppers

chose this one, by the way.

I want to let everyone know we have a new member – Ashley at Lady Tailor. She will join in starting next week. Welcome Ashley!

Of course I had to read Whateverland, by Alexis Stewart (Martha’s daughter) and Jennifer Koppelman Hutt (who costarred with her on the Whatever radio and TV shows). This is being billed as some kind of self-help guide – their rules for living or some such nonsense. Let’s be honest here. The only reason to read this is to snoop inside their lives, specifically Alexis’s world with her mother. Each chapter is made up of vignettes from each of them (Alexis seems to have the most though) and ends with a bullet pointed list that offers tips for living – just skip those. The lists are pointless. The vignettes are what is interesting.

Both women are not normal. At all. Jennifer is at least likeable despite her phobias and anxiety. Raised in a sheltered, wealthy life as a child of a music industry mogul (she celebrated Xmas with Barbra Streisand and had the Beastie Boys perform at her sweet 16 party) she’s very open about her issues and how they developed. I loved her honesty and thoughtfulness about her life. She recently lost a lot of weight and is very open about her life before and after the weight loss. She comes across as a person you would enjoy chatting with and definitely has that girlfriend vibe.

Alexis, on the other hand, is unlikeable, cold, entitled, and just awful in so many ways and it comes out loudly and clearly in this book. She spends a lot of time blaming her parents for making her the way she is but there isn’t a lot of reflection on her own persona in any thoughtful way. She’s very rigid. She’s also just really weird – she hates having breasts, she is very open that she likes to sleep with a lot of men, she loves to bake but will not eat a single thing she makes, she hates hugging or touching people, and she makes it clear she just does not like people at all. She’s honest about the fact that she has seemingly no drive or interest in a career and that Martha owns her giant apartment.

If you are interested in what Martha was like as a mother, you’ll want to read this. You’ve probably heard the media frenzy when this book came out about how Alexis had “a glue gun to her head,” had to wrap her own Xmas gifts, and how Martha always went to the bathroom with the door open. There’s lots more in here though, as well as plenty of photos of Alexis as a child. There are plenty of contradictions – Martha was a cold, uninterested, neglectful, unloving mother (Alexis had to shorten her own school uniforms – there is a photo of her with a horrible looking hem – her parents never played games with her, they bought her nothing, she had to do lots of hard manual labor), yet there are stories about Alexis waking up to a giant Easter basket of her favorite candy and how Martha held little “chef” classes for Alexis and friends.  She also makes it clear that despite the horrible things she says about Martha, that they are very close. She does not speak at all about her new daughter, Jude (Jennifer talks about her children and being a mom frequently), which I find quite strange.

One of the weirdest things about the book is the final chapter in which the women say they are no longer co-workers (Jennifer does the Whatever radio show alone now) and no longer friends. No explanation is given. I saw them appear on the Today show together to discuss the book and it was clear to me that Alexis decided she was done with Jennifer (she said something about how it’s like a divorce where you wake up one day and decide you no longer like this person). That comes as no surprise after the way she talks about how she enjoys seeking revenge on people and how she kicks people to the curb in her life frequently with no regrets.

If you’re hoping for a self-help book, look elsewhere. If you are just nosy and want to get the inside scoop on Martha, pick this up for a quick read.

I was making a really quick dinner recently but was just craving something that felt slow cooked. I came up with this moist, delicious chicken recipe that has a cider infused gravy. It was fantastic (yes, there was fighting over it at the table). Serve with some mashed or oven roasted potatoes (which will taste great with the gravy!).

salt and pepper to taste

Preheat oven to 400 and spray a small glass baking dish. Place the chicken breasts in it and pour cider over them. Sprinkle onion powder, rosemary, salt and pepper on chicken and dot with butter. Bake for 25 minutes until the breasts are cooked (165 degrees with a meat thermometer). Remove the breasts and heat the pan over a burner. Whisk in Wondra and broth until thick. Serve over chicken.

Super simple, but with a very complex flavor!

Sassy Suppers has chosen sausage stuffed red onions from November Living.  Pictured on pg. 141.  Recipe on pg. 198. If you need the recipe, let me know. 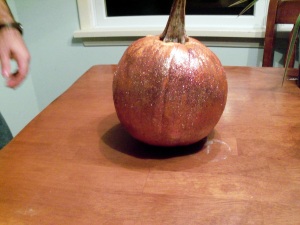 Megan’s Cookin’ chose glittered pumpkins for today. My project was pretty much doomed from the start. I didn’t have a pumpkin left from Halloween. My grocery store did not have any. We got one from my mom, but it was rotting inside, so the stem came off. Oy. We also tried to do this in the doorway of the garage and the wind kept blowing the glitter away. It wasn’t pretty, but it got done.

It doesn’t look half bad in the picture. Megan told me she was going to try glittering some other things for this, which I think would be cute. I thought about doing some apples, but ended up just sticking with the pumpkin.

Did you try this?

I ran into this new entry in the produce department and couldn’t resist. I paid $4.99 for the bunch, but wait! Not only do you get the roots, but the tops are just regular parsley, so it’s like getting a bunch of that too.

I peeled the roots and roasted them with some carrots (about 45 minutes with 1 tablespoon oil, plus salt and pepper, then drizzled balsamic vinegar before serving). It tasted just like parsnip to me, but with a little bit of parsley flavor. They were fun to try. Have you tried this 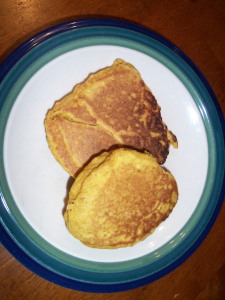 I love cooking with pumpkin. Pumpkin bread, pumpkin cookies, pumpkin pie, and pumpkin muffins are in my fall and winter rotation. Sunday mornings are when we have our “big breakfasts” at my house – pancakes, waffles, or French toast with bacon and/or sausage. It’s infinitely complicated because some people need their bacon practically raw, while others prefer it very, very well done. Mr. MarthaAndMe always has bacon duty and it is a toss up if it will burn – we buy organic uncured bacon which somehow goes from raw to black in the microwave in an instant. Don’t get me started on the sausage either. We have to make two kinds – those frozen little ones and fresh apple maple chicken sausages – to please everyone.

Pancakes aren’t always a slamdunk. Plain goes over well, as do my oatmeal pancakes. Mr. MarthaAndMe and I like blueberry pancakes and I adore buckwheat pancakes, but the kids won’t touch them. I would never in a million years eat chocolate chip pancakes but the kids love them. So, you can see that breakfast isn’t a simple task.

This past Sunday I decided to put together some pumpkin pancakes, thinking that everyone would eat them since the kids love anything with pumpkin. Silly me. Dude Martha complained that he liked pumpkin, just not in his pancakes, and would not try them. 3 out of 4 of us did eat it and loved it.

Mix and cook on a griddle or in large pans that have been sprayed with cooking spray. Try to spread the batter out when you pour it. If the pancakes are very thick, they take much longer to cook through. Makes 10-12 pancakes. Serve with maple syrup.