Sassy Suppers has chosen popsicles for next week. That sounds very refreshing in this heat wave! 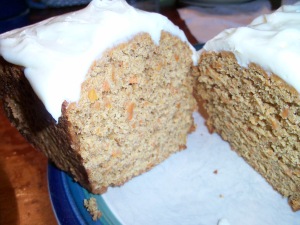 Megan’s Cookin’ chose this week’s project and after several of you suggested having a general category where you pick your own, we went with the ability to choose your own project from the list of quick breads. I made Carrot Tea Cake with Cream Cheese Frosting. Very simple to put together. I enjoyed this, but I think I expected it to be a bit more carrot-y and moist like carrot cake. It was good for a tea cake, but honestly the frosting was what made it so good. Without it, it would be sort of blah. What did everyone else make?

Steak and Potato Kinda Gurl picked Corn, Bacon and Scallions for today’s project. You can’t go wrong with bacon. This tasted great , but I would probably not make it often because of all the bacon fat. It was really easy to make though and the corn and scallions looked great together. Did you make this? 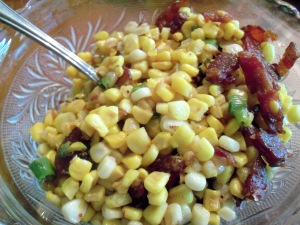 I chose this week’s project, Poppy Seed Danishes with Cherry Cream Cheese Filling. This recipe is from May Martha Stewart Living. I used strawberry jam instead of cherry. I had some trouble with the folding. I probably should have stuck my dough in the fridge, but scraping it off the counter and doing that was just too much work. I thought these were really good, but they were 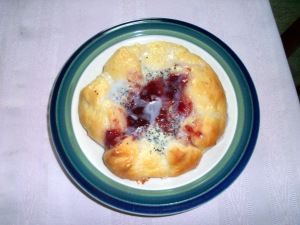 a bit big and doughy, so if I made it again, I would roll it out thinner to make more. That’s my only criticism, otherwise they were a hit here. I thought they were pretty and had a very nice flavor. I liked the cream cheese with the poppy seeds and the strawberry jam was just great. I had to bake mine longer than the recipe said, but I almost always have to do that! My oven must not be calibrated correctly.  I’ve never made a danish before, so this was a new one for me! How did this turn out for everyone else? 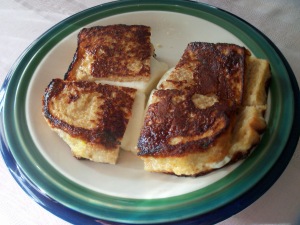 Bizzy Bakes chose today’s project, grilled mozzarella sandwiches. What did you think? It was easy enough to make. My family said the bread tasted like French toast. My mozzarella did not melt completely, so I didn’t like that aspect. It was something different, but didn’t quite do it for me.

Today’s project for Mrs. Kostyra’s Stuffed Peppers was chosen by Ana at Sweet Almond Tree.  I’m sorry to say, I’m just not a fan. I love to eat peppers raw, but I just don’t like them cooked. This recipe didn’t change my opinion. The stuffing was not bad – tomatoes, rice, onions, raisins (blech), cut up peppers, and herbs — but it just did not enjoy it. It looked pretty though and I think if you like cooked peppers, you would enjoy this. 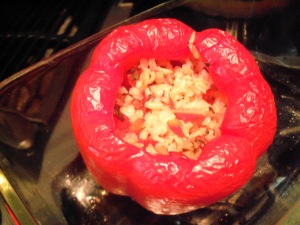 Ana at Sweet Almond Tree has chosen Stuffed Peppers for Monday’s project.  We were away in FL last week and I’m looking forward to getting back to doing some Martha projects. 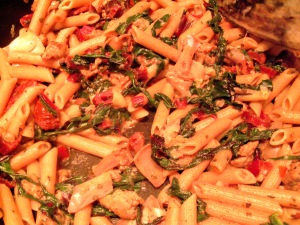 Tiny Skillet chose this week’s project – Whole Wheat Penne with Sausage, Chard, and Artichoke Hearts. This is something I never would have made on my own, so I enjoyed trying something new. It was easy to make. I’ve never used Swiss chard in pasta, so that was different. I am not a fan of sausage, so I ended up picking it out of mine mostly. I almost never use sun-dried tomatoes because I usually find them to be bitter, but they were good in this. I liked the artichoke hearts in it. This did not have much sauce at all, even after I added the pasta water to it.  I thought it was pretty good,but probably not something I would make again. Although now I might try using chard in some other pasta dishes. My picture is horrible – it was not this red looking at all.

Thanks to Tiny Skillet for picking Penne with Sausage, Chard and Artichoke Hearts for next week’s project. Should be fun to try! As always, if you’d like to join Martha Mondays, all are welcome. Just leave a comment or drop me an email. 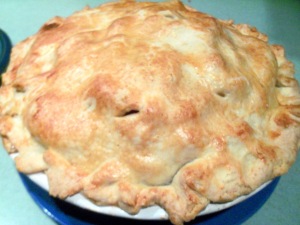 Pru at Perfecting Pru chose apple pie for today. I haven’t made a pie since Thanksgiving! I enjoyed this. It turned out very beautiful – I’ve never brushed the top of a pie with egg before and it made it look great. I could not fit 12 apples in mine. I think I fit about 9. Everyone enjoyed it.

I had a little trouble getting the pieces out neatly, so Teen Martha declared it was “pile” not “pie.” Regardless, it tasted great. 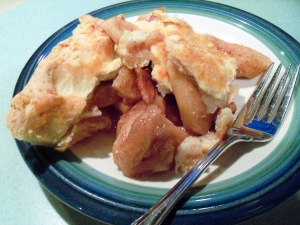