The April issue of Martha Stewart Everyday Food has a recipe for Broccoli, Tomato and Mozarella Stromboli. In this neck of the woods, we call these pizza pods, which are made at a local restaurant called Pizza Plant. We like to go there because you can custom order your own pod. I usually order one with a spinach dough and spinach and mushrooms inside. Mr. MarthaandMe likes his with anchovies. The kids have always liked it there too because they bring some fresh dough to the table for kids to play with. 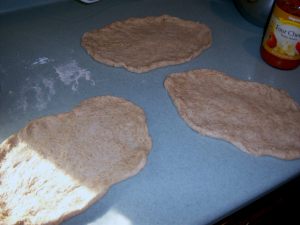 So, I was happy to give Martha’s stromboli a try. I bought wheat pizza dough at the grocery store and reserved 1/4 of it for Mini-Martha, who wanted to make a small pizza instead of a stromboli. I rolled the other 3 pieces of dough out, but it was difficult to get them to the right size.

Next, I piled on the ingredients. Mine had broccoli (and can I say this recipe calls for frozen broccoli which I have never in my life bought before – I was brave and bought it), spinach, salami, mushroom, cheese and sauce. Mr. MarthaandMe’s had mushrooms, broccoli, salami, cheese, sauce and anchovy paste (blech!). 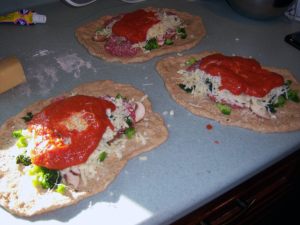 Rolling them up was a bit of a challenge because, as you can see,  I may have overstuffed them a teeny bit!

Now we come to the part where things got a little hairy. I rolled them up and put them on the baking sheet, seam side down. The recipe says to line the baking sheet with foil. I was a bit surprised by this since Martha seems to have a paranoia about foil touching food and all of her recipes tell you to put parchment between the foil and the food. Not so in this recipe. It says to put the strombolis on the foil. So I did, then I baked them. 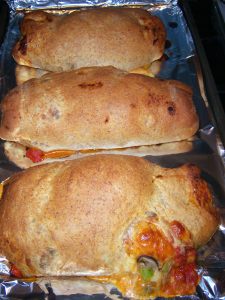 They turned out gorgeously brown and puffy with some filling oozing out. Then I tried to get them off the baking sheet. Right. Not happening. The foil stuck to the bottoms and would not peel off. It was a huge mess. I may have lost my temper and had a few choice words for Martha. Sometimes I get so tired of spending all this time and effort and having things not turn out.

I may have thrown down my spatula in disgust and walked away. Mr. MarthaAndMe valiantly stepped in. He ended up cutting the foil between them, flipping them over and peeling off tiny pieces of foil one at a time. Very frustrating and ridiculous.

I was so upset I forgot to take a photo of the inside, so you’ll just have to use your imagination. They tasted good and I enjoyed the salami, which is not something I would normally have added.  Would I make this again? I don’t know – I think I would rather just have a pizza. Same ingredients and less mess.