My teenage daughter eagerly awaits the delivery of each issue of Martha Stewart Living. She goes through the magazine and makes a list of all the things she wants to make from it, then never has time. Yesterday, though, she wanted to make cookies, so I suggested she try the Peanut Butter Chocolate Chunk cookies in March Everyday Food. 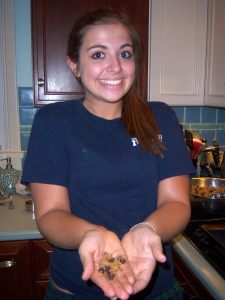 She mixed up the sugar, peanut butter, and butter then added eggs, vanilla and dry ingredients. The dough was very crumbly and did not come together at all. She stirred in the chocolate chips (we didn’t have any chocolate to chop) and then tried to use the little cookie scoop we have to make the cookies, but it would not form. Finally she ended up forming them by hand, but as you can see in the photo, they were very crumbly.

She made them larger than the recipe called for, because it was nearly impossible to get smaller ones to stay together. They took longer to bake than the recipe said because they were so large. 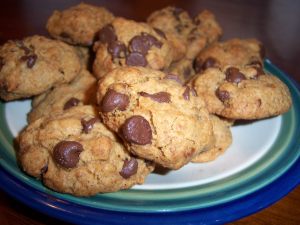 As they baked, they did not spread at all, which we thought to be surprising. The end result was a very nice cookie. Since they didn’t spread, they remained nicely formed. The peanut butter flavor was very mild and you might not realize it was a peanut butter dough right away. They were just the right mix of crunch and softness. A good thing! Nice job Teen Martha!