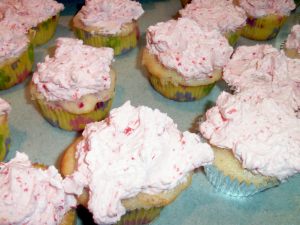 The cupcake batter was lovely and wonderful tasting – I could have eaten a bowl just of that. Sigh. They baked up nicely. I was hesitant about the frosting – strawberry buttercream. I tend not to do well with Martha’s frostings, but I went for it. It’s a basic buttercream with pureed strawberries added at the end. I took my time and it turned out well I thought. I didn’t get out the cake decorating tips – ugh. Instead I just sort of free-form glopped frosting on top of these. They looked cute I thought. They tasted pretty good too. They got a thumbs up from everyone, except Teen Martha, who wouldn’t even try one because “I don’t like fruit in my cupcakes.” My only complaint was that they weren’t chocolate! They were moist and did taste like strawberry. Now I have a refrigerator full of cupcakes which I am quickly going to give away so they don’t end up on my hips!

Martha is Sabotaging My Diet

Martha was all about the Whole Living Challenge in January, then in February she sends out an issue filled with cupcakes. Intentional sabotage, I tell you. Not fair! 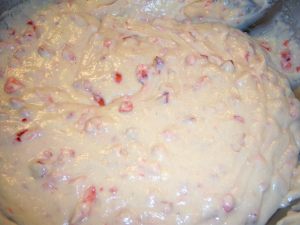 Now that I’ve gotten that off my chest, I can tell you about the Strawberry Cupcakes with Strawberry Buttercream from February Martha Stewart Living. So the cupcake part was not hard at all – basically whip up cupcake batter then add some chopped strawberries. Mini-Martha assisted. As usual, these took a little longer to cook in my oven than specified.

Next I started the buttercream frosting. You whisk egg whites with sugar over hot water until it reaches 160 degrees. No problem there. Then, apparently, you put then under the mixer and whisk it until your motor runs out. Seriously. The recipe says 5 minutes at 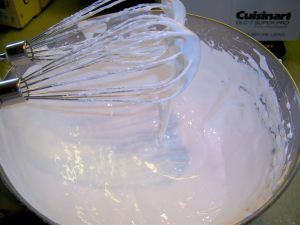 medium and 6 minutes at medium high until you get stiff glossy peaks. Well, folks, I am sorry to say, I never peaked. I went a good 15 minutes and nada.  It was worse than a bad date.  It looked like a bowl of marshmallow fluff. I gave up and added the butter, then the pureed strawberries. Now, up until the strawberry puree went in, I was sitting pretty. It seemed fine. The puree, though, turned it into slop. Far too wet to frost anything with. I am sure this is because I never got those darned stiff peaks. So, I popped it in the fridge, hoping it would solidify a bit.

It did a little bit, but it was still really runny. I put the cupcakes back in the fridge after frosting them and this helped, but they’ve got to stay in there or you’re in trouble. Also, this frosting recipe makes WAY too much. If I had cut it in half, I would have still had plenty.

The verdict? So-so in my opinion. These cupcakes are moist and the frosting is a pretty pink color. The flavor? Well, have you ever tried to make strawberry muffins? Kind of the same deal – you can see the strawberries and sort of taste them, but for the most part, they don’t taste super-strawberry at all.  I wouldn’t make this one again. Besides, really, when you get right down to it, I would much rather just have chocolate cupcake and be done with it!