Mr. MarthaAndMe just had a birthday and he always asks for gingerbread with lemon sauce for dessert. His mother used to make this from a box when he was a kid. I make my own. He is the only one in the house who really likes it, so he usually works his way through the pan after about a week! I served this once at a family Christmas party (minus the raisins) and everyone loved it.

Preheat oven to 350 and spray a 9″ square pan. Mix butter and sugar. Add eggs, then molasses.  Mix in all the dry ingredients, then the hot water. Stir in raisins. Pour into the pan and bake for 35 minutes until a cake tester comes out clean. Allow to cool at least 20 min before serving.

Mix sugar, cornstarch and salt in a pot. Stir in the water until it is mixed. Cook, stirring, on high until it boils. Reduce heat to medium and cook until slightly thickened and clear about 7 minutes. Remove from heat and stir in butter, lemon juice and zest. Serve with gingerbread.

Ana at Sweet Almond Tree has chosen Stuffed Peppers for Monday’s project.  We were away in FL last week and I’m looking forward to getting back to doing some Martha projects.

I’m working on building my supply of frozen dishes back up after a catastrophic freezer death. I made this and froze half for another night. This is adapted from a recipe in Cooking Light, March 2011.

1/3 cup cilantro, chopped (I actually used pulverized cilantro that comes in a squeeze tube, so I used the equivalent)

Preheat oven to 425. Mix chicken, corn, half the cilantro, sour cream, red pepper, cumin, salt, pepper. Cook half the onion with half the garlic then add to the chicken mix.  Cook the rest of the onion, garlic, broth, salsa verde, and water in a pan, bringing to a boil. Reduce to simmer and cook for 15 minutes. Add the rest of the cilantro.  Use a stick blender to blend it.

I served this with some extra sour cream and lettuce. It was really good – creamy, flavorful, and easy. If you like spicy things, double the amount of salsa verde you use, but I don’t. 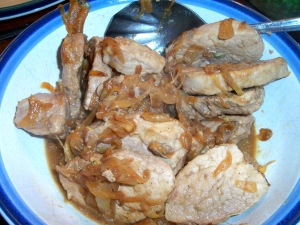 Our chest freezer died a couple of weeks ago, which really threw off my cooking for a while. I had to actually know what I wanted to make and buy it, instead of just going down to the freezer and digging each night. We ended up getting a new freezer finally (an upright this time), so I am finally getting my groove back when it comes to cooking dinner. Here’s a great little dish I whipped up that has caramelized onions in it and makes me think of French onion soup.

Cook the onions in the oil over medium low for 30-45 minutes until caramelized. Stir often. Once they are dark golden, add the sugar, pork, garlic, salt and pepper and cook on high, browning the pork. Reduce to medium low and add chicken broth, soy sauce and cornstarch. Mix well and cook about 5 minutes until sauce thickens and pork cooks through.  Teen Martha, who proclaimed she normally does not like pork, loved this and claimed the leftovers for herself for the next day.

Tiny Skillet chose this week’s project – Whole Wheat Penne with Sausage, Chard, and Artichoke Hearts. This is something I never would have made on my own, so I enjoyed trying something new. It was easy to make. I’ve never used Swiss chard in pasta, so that was different. I am not a fan of sausage, so I ended up picking it out of mine mostly. I almost never use sun-dried tomatoes because I usually find them to be bitter, but they were good in this. I liked the artichoke hearts in it. This did not have much sauce at all, even after I added the pasta water to it.  I thought it was pretty good,but probably not something I would make again. Although now I might try using chard in some other pasta dishes. My picture is horrible – it was not this red looking at all. 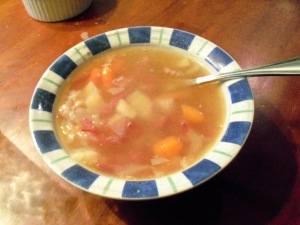 We celebrated a very late St. Patrick’s Day (had to cancel the original because I was sick). I’ve always wanted to make reuben soup with the leftovers and this year I finally did. I saved the broth that I cooked the corned beef in to use for the soup. When I was ready to make it, I dumped about half of it out and poured in low sodium beef broth to replace it (I would say I had about 4-5 cups of each) and added 2 cups of water. I chopped up about 3 cups of cabbage (uncooked) to put in and half a bag of baby carrots. I added pepper, onion powder (about 1 tsp) and celery salt (about 1/2 tsp). Once the veggies were cooked, I cut up about 8 baby red potatoes that had been cooked with the corned beef and added those. Then I went through my leftover corned beef and used all the little loose pieces that fall off (after picking the fat off). There were about 2 cups of that. I shredded 1 1/2 slices of Swiss cheese and added that.

I served each bowl with a piece of pumpernickel rye bread that had been toasted, with a slice of Swiss cheese on top. I cut mine up into pieces and added it to my soup (kind of like French onion soup, but without all the mess on top of the bowl).

It was delicious. Mr. MarthaAndMe and has reserved leftovers to take to work for the rest of the week. I still have lots of corned beef left for reuben sandwiches too.

Thanks to Tiny Skillet for picking Penne with Sausage, Chard and Artichoke Hearts for next week’s project. Should be fun to try! As always, if you’d like to join Martha Mondays, all are welcome. Just leave a comment or drop me an email.

Teen Martha won’t be a teen for much longer. She turned 19 last week. One of our traditions is that the birthday person gets to choose his or her birthday meal. This has resulted in many creative endeavors with me trying to fulfill their wishes. This year was no exception. Teen Martha asked for chicken breasts stuffed with cheese, blueberry muffins, carrots with honey and dill, cauliflower with Parmesan cheese, and for dessert a cookie dough cake or cupcakes. I scratched my head at this one a bit and did some googling. I soon determined there were a couple of options: cookie dough cheesecake, cookie dough cupcakes (a cake bakes too long and would cook the dough too much) or a layer cake with a layer of cookie dough inserted after baking. Teen Martha

I used Martha’s recipe from her Cupcakes book for buttermilk yellow cupcakes. For the cookie dough center, I used this recipe from AllRecipes.com. I used my cookie dough scooper and made exactly 24 balls of dough which I froze. Then I filled the cupcakes up 1/3 of the way with batter, put the dough ball in the center, and filled the rest of the way with batter. Next time I would make the balls a little smaller and be careful not to overfill the cupcakes (some of them just ran all over the place). They took a really long time to bake – about 40 minutes. And even so, some of them sank in the middle when I took them out.

I made up a frosting in the Cuisinart with butter, powdered sugar, cocoa, milk, and some melted chocolate. They were hard to frost and the edges kept breaking off, so this was not anything gorgeous to look at, but it tasted really good and it satisfied Teen Martha’s craving for cookie dough! There’s just something about cookie dough…

Pru at Perfecting Pru chose apple pie for today. I haven’t made a pie since Thanksgiving! I enjoyed this. It turned out very beautiful – I’ve never brushed the top of a pie with egg before and it made it look great. I could not fit 12 apples in mine. I think I fit about 9. Everyone enjoyed it.

I had a little trouble getting the pieces out neatly, so Teen Martha declared it was “pile” not “pie.” Regardless, it tasted great.