Our project for next week is Easy Peanut Butter Cups, chosen by SteakandPotatoKindaGurl. This will be her last pick as she is leaving us to go back to school and work.

This week’s project was chosen by yours truly: Chocolate Beet Cake (from November Living, not online yet). Wow! The gold standard for chocolate cake in my house is my grandmother’s Miracle Whip cake and this was just as good. It was incredibly moist and you would never know there were beets in it. It just tasted like a delicious, very moist chocolate cake – it looked just like a chocolate cake too.

I don’t know how often I would make this though, because beets are just a pain 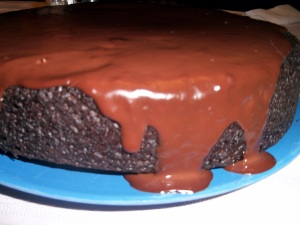 to work with! You have to peel them, then cut into pieces then boil then puree. I have an off-white Corian sink and was totally paranoid about it getting stained. I was able to find a pair of medical gloves to wear so I didn’t stain my hands. I peeled the beets on top of newspaper. I drained them out in the yard to avoid the sink issue entirely.

Other than the beets, the cake was easy to make and had an easy chocolate glaze, only one layer which I appreciated. It was so good I sent it away with Mr.

MarthaAndMe this morning – can’t have that in the house AND the Halloween candy!

As you can see, I took it out of the oven a smidge too early – the very center didn’t quite cook all the way. I took it out with5 minutes remaining because it seemed done. I should have tested it with a cake tester.

I’m wondering if this would work with roasted beets (where you roast them whole, then just rub the skin off with a paper towel), or even canned beets so you wouldn’t have to cook them yourself at all.

Congrats to Diane Fala who won the year’s subscription to Everyday Food. I hope you enjoy it Diane, and thanks to everyone else who entered. 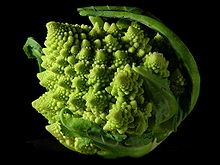 Romanesco is a cross between broccoli and cauliflower. I recently picked a head up at the grocery store. It’s shaped kind of weirdly, with the florets being sort of pointy. It’s a pale green color. I decided to cook it simply so I could understand the flavors. I cut it into florets and steamed it until it was tender. I seasoned it only with butter and salt and pepper. It truly tastes just like a cross between broccoli and cauliflower. It’s got more of the texture of cauliflower, as well as the sweetness. I really liked it will try it in some more adventurous recipes in the future.

Have you tried it? What did you think?

It’s been a while since I tried a recipe from Martha’s show. Recently she made apple dumplings with the author of The Apple Lovers’ Cookbook. I had to make this one.

For several years, we rented a cottage each summer in New York state’s Finger Lakes region, on Cayuga Lake. One of our favorite things to do was visit Sauder’s Store in Seneca Falls (the town that Bedford Falls in the movie “It’s a Wonderful Life” was modeled after). Sauder’s was smaller then than it is now (now they sell woodcrafted items and plants outside), but it had a huge bulk section and lots of Mennonite and Amish made baked goods. There were always Mennonites shopping in the store when we were there, which my kids were fascinated by.  There is a bookstore section that sells Mennonite and Amish cookbooks and other books. We always purchased birch beer (similar to root beer) here, a treat we always enjoyed at the fair each summer, but which you could not find in stores at that time. There was a meat case and I always bought Lebanon bologna, a cold cut that looks exactly like salami, but tastes like sweet bologna.

The baked goods were the highlight (whoopie pies, breads, pies, cookies) and apple dumplings were one of our favorites. I’ve never tried to make this and really forgot about it until I saw it again on Martha’s show!

I followed the instructions on this recipe to a “T”, but I think the problem was that my apples were too big. It’s really hard to find small apples here in NY state, where our apple crop is a big deal and sellers pride themselves on selling big, ripe, beautiful apples. I ended up cutting an inch or so off the tops of my apples, but they were still too big to fit in the dough squares. I ended up rolling the pieces of dough out to be larger and I still had to smush them to get them to cover most of the apples.

Other than, that it went well. The cider sauce is simple and it was all much easier than I imagined. This was really delicious. I think I might make regular pie crust next time instead of this dough recipe. I will definitely make this again. The entire family loved this. 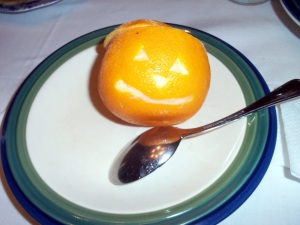 Thanks to Ana at Sweet Almond Tree for choosing our Halloween themed dessert – jack o’lantern oranges with sorbet. I used orange sherbet for mine. This is a really cute dessert that would be perfect for little kids. Carving a pumpkin is a lot of work for little kids and takes forever in their eyes. This is quick and then you get to fill it to make a nice little dessert. Loved it!

It’s my pick for next week and I already know what I want to do! The Chocolate Beet Cake from November Living (if you need the recipe, let me know).

I was dying to try making my own sauerkraut after seeing Martha’s article on it in October Living. It sounded so easy! My mom remembers her German grandmother making homemade sauerkraut, which she kept in a crock on the kitchen counter. My mom says she just remembers it smelling awful. I wasn’t afraid (and mine actually did not smell at all).

To start you thinly slice up a head of cabbage and mix it with 1 tablespoon salt and 1 tablespoon caraway seeds. You let it sit for about 5 minutes then you are supposed to squeeze the cabbage to release the juices. This was not easy! I kept squeezing and squeezing, and didn’t get much. Next you’re supposed to put it in a jar and cover it with a cabbage leaf and put a lid on it, opening it each day to let the air out. I decided to follow the method in a book I have, DIY Delicious, and instead covered the jar with a cloth attached with a rubber band. You were supposed to make sure the cabbage was covered in the liquid. It was, but barely. You leave it out on the counter for several days until it reaches the 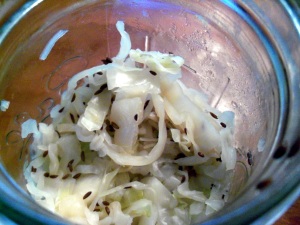 sourness you like. I left mine out for 5 days and it did not get very sour, but that was ok with me. (Next time I will let it sit a little longer, just to experiment with the level of sourness).

The problem I did have was that the liquids evaporated a bit and it grew kind of a white crust on top (which I scooped out) after a few days. I checked with some friends who said that was ok – and also that I probably should have added some water if the liquid went down (I’ll do that next time).

I put my jar in the fridge for a few days, then decided it was time to use it in a dish, so I came up with this hearty supper:

salt and pepper to taste

Spray an 8×12 pan with cooking spray. Cut a deep, wide pocket in each chop. Rip up the bread and muffins and mix with shallot, garlic, sage, thyme, olive oil and salt and pepper to taste. Add water until the stuffing is moist enough that it holds together. Stuff the chops and place them in the pan. Season them with salt and pepper.

Distribute the sauerkraut around and on the chops. Cut each apple into 4 slices and place on top of the chops. Sprinkle with cinnamon. Cover with foil and bake at 350 for 1 1/2 hours, or until the chops are completely cooked. Be sure to spoon some of the liquid from the pan onto your chop and stuffing when you serve it.

This was fantastic. First of all, the kraut. It wasn’t very sour at all, but it had a little bite. It tasted so much fresher and sweeter than kraut I’ve purchased in the past. I will definitely be making this again, particularly since you can keep it in the fridge for months. And this time I’ll add a little water.

The chops baked up very moist, which pork chops often do not do when they are baked. The kraut and apples added moisture and lots of flavor. The stuffing had interest because of the corn muffins. The apples were tender and pretty and tasted delicious with the chops and kraut.

This was the perfect fall meal! I want to make it again soon because I just could not get enough of it!

October 22 marks the third anniversary of MarthaAndMe. It’s been a fun and amazing three years. I started out the first year blogging every single day, and unofficially apprenticing myself to Martha. I learned so much in that year and it ended up being a great bootcamp for me. In year two, I slowed things down and added in my own recipes. The third year was an even bigger change, with more and more of my own recipes. I also wrote and sold three cookbooks in year three! I have Martha and this blog to thank for that!

Along the way I’ve made some great friends, tried new and different projects, and continued to expand my love of cooking and my skills with decorating, organizing and (sometimes!) crafting. What will this fourth year bring? I don’t know for sure, but I do know Martha Mondays continues (click the tab at the top of the blog to learn and to join!), I’ll continue to share my own recipes and my forays into Martha’s world. Cookbook #1 (The Parchment Paper Cookbook – You can enter to win a copy of that on my other blog) is out. The Organized Kitchen and The Muffin Tin Cookbook will be coming soon. I’m contemplating a major site redesign this year as well, so that will be an exciting change.

Mostly I want to thank all of you who have followed me, commented, read along, popped in occasionally, and become my friends. My thank you gift to you is a one year subscription to Everyday Food Magazine. I’m giving away one to a lucky reader. To enter, just leave a comment on this post.

You must enter by midnight ET on Wednesday October 26. I’ll randomly and blindly select the winner by random number drawing (numbers assigned in order of comments here). Sorry, offer limited to U.S. addresses only and entrants age 18 and up only. One entry per person. Winners notified by email given when entering, not responsible for email transmission problems. You are responsible for notifying me of your correct mailing address if you are selected as a winner. Contest closes at midnight Eastern time on 10/26/11. Prize is nontransferable and may not be redeemed for cash. MarthaAndMe reserves the right to announce the name of the winner on the blog.

Sweet Almond Tree has chosen Orange Jack O’Lanterns with Sorbet for Monday. Can’t wait to see how everyone’s turns out!